by admin
indexintermediatematchvlookup
Lookups are popular in Excel and here I’ll look at the more popular one – VLOOKUP. However it’s not always the best option for doing lookups in Excel, and I’ll show you why.
VLOOKUP
Exact Matches
What Vlookup does is look for a value you have selected, and if it finds it, will return a value from the same table that corresponds to the matched value.
One of the key limitations of VLOOKUP is it cannot return results left of the matched item, only to the right. This is where I recommend the INDEX & MATCH formula (see later down), as that combination will allow you to go left or right and won’t require you to re-arrange your worksheet just to accommodate a formula.
Example 1 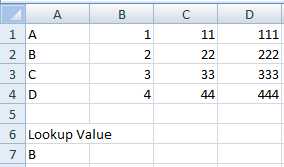 If I wanted to lookup value B in the table, I would enter the following formula:
=VLOOKUP(A7,A1:D4,2,false)
This will equal the value in cell B2, the number 2. If I changed the column number from 2 to 3:
=VLOOKUP(A7,A1:D4,3,false)
It would return the number 22, or cell C2.
If I selected column 5, it would result in an error because my table range (A1:D4) only contains four columns.
If instead of looking up letters in column A I wanted to lookup numbers in column B, I would have to change my table range from A1:D4 to B1:D4, and it would look like this:
=VLOOKUP(A7,B1:D4,3,false)
I would also have to change the value in A7 so that it is a number. But again, if I change the formula this way I cannot move to the left and find out what letter corresponds to my value. Not without re-arranging my table.
Note that before I changed the range column 3 related to column C, now it relates to D because the table has shifted. Column 3 relates to the column number in the table, not in the spreadsheet.
Approximate Matches
The one strength of VLOOKUP is determining what category or range a value falls into. By changing the last argument in the formula to true, Vlookup no longer looks for an exact match. Why would this be useful? Let’s say you have the first 3 letters/numbers of a postal/zip code. Because there are so many combinations possible, you would have to list each one out to find an exact match.
With VLOOKUP’s approximate match, it will determine the closest match (e.g. shipping rate codes won’t spell out an entire postal/zip code, but will often cite a range). Similarly, if you have tax brackets and need to know what bracket an income level falls into, this is where it would be useful as well. The one caveat is that the values in the table must be in ascending order.
Hlookup is a parallel formula to Vlookup, only that it looks horizontally rather than vertically.
Example 2 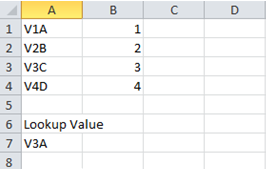 In this example, my formula looks like this:
=VLOOKUP(A7,A1:B4,2,TRUE)
The argument at the end has changed from FALSE to TRUE, meaning an exact match is no longer needed. If I had set it to TRUE, it would return an error. But in this case, it returns cell B2, or 2. The reason for this, is because the values are in ascending order, it correctly identifies that V3A falls between V2B and V3C. Since it has not yet reached V3C, it belongs to V2B. If V3A is changed to V4D, X, Y, or a value greater than V4D, it will equal 4, as it will recognize that it belongs to the highest category.

INDEX & MATCH
I mentioned using INDEX & MATCH will give you a more versatile formula. This formula is structured differently than VLOOKUP in that it will pull the coordinates from the row and column number you specify. The match function will allow you to determine the proper row number based on your search criteria, and the column number you can decide – whether it is left or right of the matched value, it doesn’t matter here.
Example 3 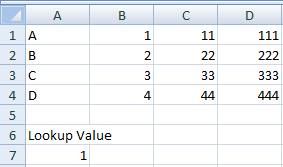 Going back to the Example 1, I’ll show you how using the INDEX & MATCH formula will be able to now move to the left and pull values from column A:
=INDEX(A1:D4,MATCH(A7,B1:B4,0),1)
The range is unchanged, but the second argument in the INDEX formula (relating to row number) is calculated using the MATCH formula. The MATCH formula looks for the value in A7 (1), in the range B1:B4 and returns the row number. The 0 in the MATCH formula represents an exact match. After the MATCH formula, the last argument in the INDEX formula is the column number, which has been set to 1, which will return the values in column A. The advantage of using INDEX and MATCH as you can see is you can change the column number to 1, 2, 3, or 4. Similarly, if you wanted to look up the values in column C instead of B, you would change the formula as follows:
=INDEX(A1:D4,MATCH(A7,C1:C4,0),1)
In this case you don’t need to change the column number, it doesn’t move since you don’t have to rearrange the table.
In short, when you should use either formula:
Looking up a value – INDEX & MATCH*
Finding a value based on ranges – VLOOKUP
*unless you just want a quick formula and the values you need are to the right