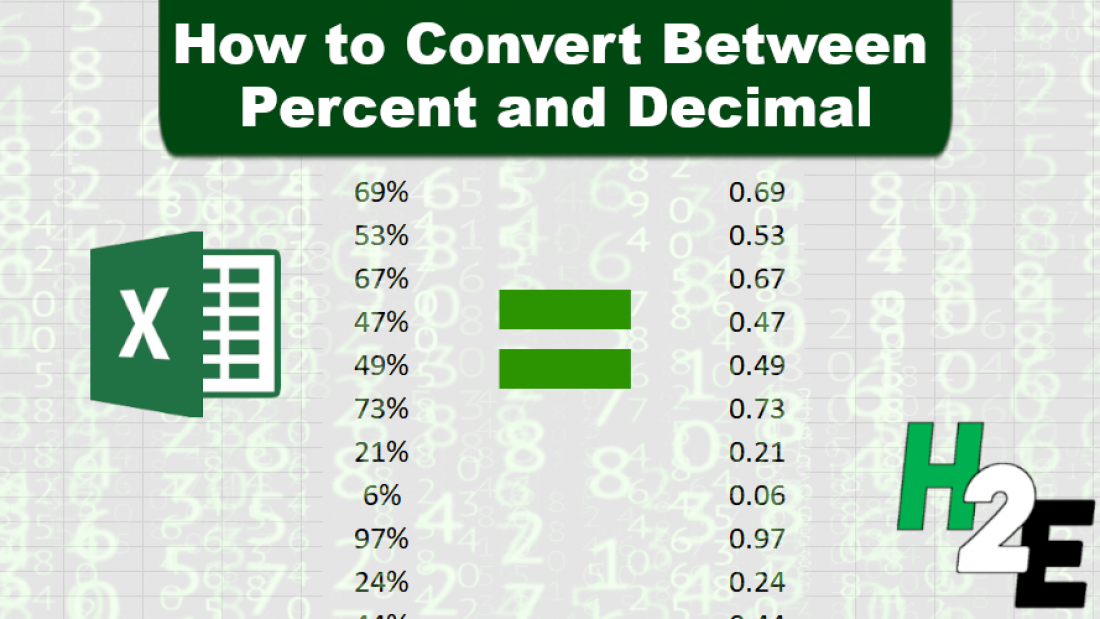 There are numerous ways to display numbers in your reports. Using percentages and decimals are two common ways to do so. In this post, I’ll cover when it might makes sense to use percentages and when to decimals may be more appropriate. I’ll also provide you with some easy-to-use formulas that will allow you to convert percent to decimal, and vice versa. You can do these calculations whether you’re in Excel or just have a calculator handy.

Converting between percent and decimal

If you want to convert numbers between percent and decimal, the process is incredibly simply in Excel. Select the value(s) you want to change and then select the format you want.

However, if you’re not using Excel, you can still accomplish this manually. To convert a percent into a decimal, all you need to do is to pretend you’re moving the % sign two spots to the left, and then convert it into a period.

In the case of 50% it becomes .50, or 0.50, depending on whether you want to display the 0 in front. This also works with large percentages, such as 1,000%. That’s a significant percent, but the same logic applies, and following the same steps would convert the value to 10. That tells you that the new value is 10 times the size of the original value.

To convert back into percent, you multiply the value by 100 and drop the % sign.

Formula for converting decimal to percent:

Formula for converting percent to decimal:

How to calculate percent of something versus percent change

One important distinction you should consider is to determine whether you’re looking at a portion of something, or a change in value. If you’ve eating half of a pizza, that’s 0.5 of it, or 50% of it. But if you’re talking about the price of something going up by 10%, that’s a slightly different calculation.

The formula for percent change:

The formula to calculate the portion or relative size of something:

It’s a subtle difference but it’s an important one to note, which can prevent you from making a mistake in your calculations.

What to do if your decimals or percentages are very small

If you’re dealing with numbers that go to four or five decimal places, it may not be helpful to display them as percentages or even as decimals. For example, if you were to say the odds of getting struck by lightning in your life were 0.00654% or 0.0000654, whether you use decimal or percent isn’t going to be helpful in conveying those adds.

One thing you can do is flip those numbers around by calculating the inverse. By taking 1/0.0000654, that returns a value of approximately 15,300. Stated another way, it tells us that the odds of getting struck by lightning are 1 in 15,300. It’s a far more effective way of communicating the odds as you’re no longer dealing with miniscule percentages that can be hard to visualize.

The formula for converting from a decimal value to a rate:

As you can see from these formulas, they are fairly simple and can be incorporated into your spreadsheet and even done just on a calculator. You could create LAMBDA functions with these formulas, but they involve so few steps that the time savings may not amount to much.